In 2014, Australian dairy manufacturers identified shelf-life failure due to heat-stable enzymes as one of their top three concerns.XDairy Innovation Australia presentation, July 2014 The problem hasn’t gone away. I have personal experience that failures to meet shelf-life expectations are still causing concern for UHT milk processors globally.

Focusing on proteases is a good place to start because they are one of the two main classes of heat-stable enzymes that spoil long-life milk. (The others are lipases). The most concerning proteases for the shelf-life of long-life milk are plasmin and bacterial proteases. Ultra-heat treatment, or UHT, kills the bacteria that occur in milk, which is why it becomes “long-life”. But not even UHT destroys all of the plasmin or bacterial proteases present in milk. After the bacteria have gone, their proteases continue digesting milk proteins. Over time, this causes milk to go off. It develops bitterness, coagulates or can even turn into a gel. If any of that happens before the use by date, it’s a problem.

Quantifying proteases in milk samples is therefore crucial to understanding its shelf-life potential. Until now, milk processors could not detect proteases until after the milk had gone off.  For the science behind this issue, read on.

Proteases are proteins that cut proteins.

Proteins are molecular building blocks and machines that are essential to all of life. They are found at every level in our bodies, from the histones that wrap up our DNA to the collagen that gives our skin, bone, tendons and ligaments their structure. They have many functions, besides those simple structural examples. Proteins generate the energy that powers us, read out our DNA blue-print, catalyse all of biochemistry, carry oxygen in our blood, protect our bodies from diseases, govern the birth and death of our cells, and allow us to see, smell, touch etc.

At their simplest, proteins are linear chains of amino acids. Imagine a typical simple protein as being 200 or so amino acids long. Amino acids come in 20 different varieties, and it is the precise sequence of those different varieties, which is encoded in DNA, that determines the structure and function of a protein. So, making a protein can be imagined as threading beads of assorted colours onto a string, in a pre-determined sequence. (Most proteins quickly fold into complex structures that are essential for their functions but we don’t need that level of detail to understand what follows). 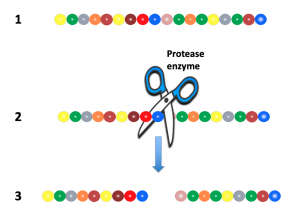 To break a protein chain, without using caustic or corrosive chemicals, you need a pair of molecular scissors. Such scissors are called “proteases”. Proteases are themselves proteins that have evolved to cut other proteins. Some are general digestive proteases that slice and dice nutritional proteins into small pieces. Others can trim one amino acid at a time from ends of those small pieces. Digestion aside, many proteases have intricate functions, which include controlling blood clotting or mediating programmed cell death. Such proteases tend to be more specific and will only cut a narrow range of target amino acid sequences.

Our bodies are making proteins all the time. To make proteins we need to eat proteins. Our bodies break down the proteins we consume into their constituent amino acids, using proteases, and then reconstruct them into new proteins.

Which brings us to milk. For many of us, milk and dairy products are a convenient source of nutritional protein. The main protein classes in milk are caseins (found in curds or cheese) and whey proteins. There are many proteases that will digest milk proteins but here I will concentrate on just two types. The first type is plasmin (the same plasmin that is found in blood). The second type comprises several families of secreted bacterial proteases, although we will discuss only one of them here.

Commonly secreted bacterial proteases come from Pseudomonas fluorescens bacteria and their relatives. These bacteria grow quite well in the cold, so chilling of milk slows them down less than it does other bacteria. If raw milk is stored for four days at 4°C (shorter times if the temperature is higher) the density of Pseudomonas bacteria can rise to over 1 million per mLXStudy of proteolysis during storage of raw milk at 4 °C: Effect of plasmin and microbial proteinases. At these densities, the bacteria secrete enough protease to spoil the milk months or even weeks later, resulting in bitter flavours or gelation. Unfortunately, Pseudomonas proteases are heat resistant, so pasteurisation or UHT processing will not destroy them.

There are several differences between plasmin and secreted bacterial proteases, what is relevant here is that they come from different sources. They also attack different components of the milk. Knowing this, it is potentially possible to work out from the pattern of damage which protease is responsible. This is a first step to identifying the source of the problem..

• Pseudomonas proteases tend to preferentially digest kappa-casein,XProteolysis of casein micelles by Pseudomonas fluorescens CNRZ 798 contributes to the destabilisation of UHT milk during its storage the type of casein that solubilises casein micelles in milk.  Therefore, its breakdown causes rapid aggregation of the casein fraction (Figure 2)

• In contrast, plasmin digests alpha and beta caseins readily but leaves kappa casein unchangedXEffect of Bovine Plasmin on αs1 -B and κ-A Caseins. 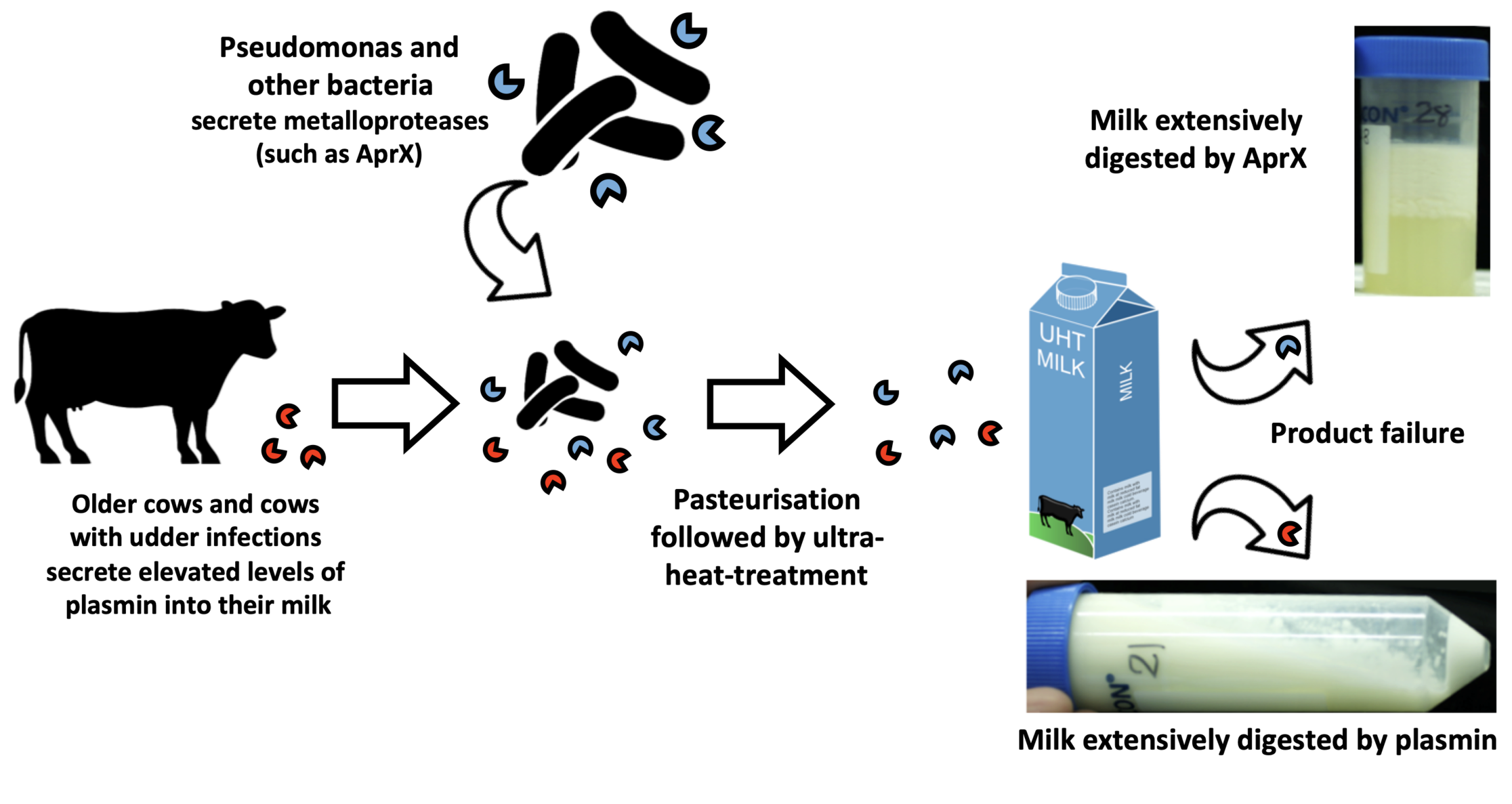 Figure 2: Sources of common proteases in milk. Cows naturally secrete plasmin (red Pacmans) into their milk, and older cows and those with udder infections secrete more plasmin. If milk is stored too long, even in the cold, bacteria will multiply and secrete metalloproteases (blue Pacmans) into the milk to break down casein. While pasteurisation and ultra heat treatment kill bacteria, both types of proteases survive heat treatment relatively unscathed. This can lead to quality problems after a few months of storage. Milk digested by the metalloprotease AprX and plasmin have different appearances, because AprX digests kappa casein, whereas plasmin does not. Note that the samples shown here were generated in the lab using excess levels of protease.  Economically significant spoilage of milk isn’t always this obvious, although sometimes it can be.

Proteases are not always a problem for dairy processors. Formation of curds, an initial part of the cheese-making process, was traditionally catalysed by rennet, a digestive protease from calves. More recently the same process has been performed using proteases of bacterial, fungal or plant origin.

Proteases that cause damage

On the other hand, plasmin and bacterial proteases are a potential problem for the shelf-life of long-life milk. Ultra-heat treatment, or UHT, kills the bacteria that occur in milk, which is why it becomes “long-life”. But not even UHT destroys all of the plasmin or bacterial proteases present in milk. Unfortunately, after the bacteria have gone, their proteases still go on nibbling away at the milk proteins. Over time, this nibbling causes milk to go off. It develops bitterness, coagulates or can even turn into a gel. If any of that happens before the use by date, it’s a problem.

People generally don’t like to talk about their failures but, from our discussions, shelf-life problems with UHT milk are not that uncommon. Getting more than four months shelf-life for UHT milk at room temperature requires very low levels of plasmin and bacterial proteases, which can only be achieved when you can be sure that you have very high-quality inputs and processes.

It is exceedingly hard to measure the low levels of proteases that can damage UHT and powdered milk. In turn, this complicates efforts to avoid or mitigate the effects of proteases. Until now, you had to use expensive, sophisticated instruments and/or take several days if you needed to measure plasmin or AprX activity in raw milk or dairy products.

The traditional methods used to measure proteases available fall into two categories. The first method can be used to quantify how much proteolytic breakdown of caseins has occurred, after the damage has been done. To do this, researchers may use fluorescamine, antibody detection, or high-performance liquid chromatography (HPLC). Because these methods can only investigate problems after the milk has spoiled, they are not relevant to screening in a production setting.

The second category of measurement aims to directly measure the activity of proteases, rather than measuring the extent of the damage they have caused. To do this, modified casein substrates have been developed that release fluorescent or coloured fragments when digested by proteases. These work best with highly active non-specific proteases, such as trypsin, but are insufficiently sensitive to measure low levels of more specific proteases, like plasmin or AprX.

Because they cannot test batches of long-life milk for proteases at the time of manufacture, dairy companies sometimes have to recall failed products, and a resulting cost of several million dollars per incident is not unusual. It would be better if it were possible to test raw milk as it arrives at the factory and re-stream or reject milk with high levels of protease.

If the overview I’ve given of the problem of milk-spoilage due to protease activity seems discouraging, you may be pleased to know that all isn’t gloom and doom. My former colleagues at the CSIRO and I have developed a new method to measure plasmin and AprX proteases quickly and accurately and have shown that this method works in milk. If you want to know more about this technology, stay tuned for an in-depth article coming soon.

The Extracellular Protease AprX from Pseudomonas and its Spoilage Potential for UHT Milk: A Review

The Role of Proteases in the Stability of UHT-Treated Milk